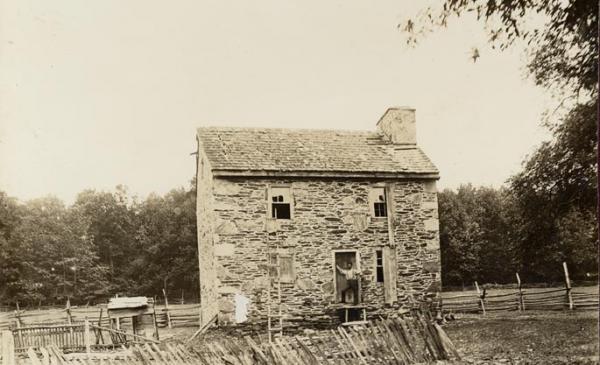 The William Parker house in Christiana, Pennsylvania, site of the 1851 Christiana Riot. William Parker escaped from slavery in Maryland and settled in Christiana in southern Pennsylvania. His memoir, The Freedman’s Story, recounts how he was inspired by the speeches of William Lloyd Garrison and Frederick Douglass to become an abolitionist. On September 11, 1851 Maryland slave owner Edward Gorsuch, his son, and federal marshals came to Parker’s home to recapture four fugitive slaves claimed by Gorsuch who were harbored in Parker’s home. Parker refused to turn over the fugitives, resulting in a violent confrontation in which Gorsuch was shot and killed and his son wounded. Parker and the fugitive slaves subsequently fled to Canada. This photograph was taken after the Civil War, and the figure in the doorway is not William Parker. For more on the Christiana Riot, see Thomas Slaughter, Bloody Dawn: The Christiana Riot and Racial Violence in the Antebellum North. 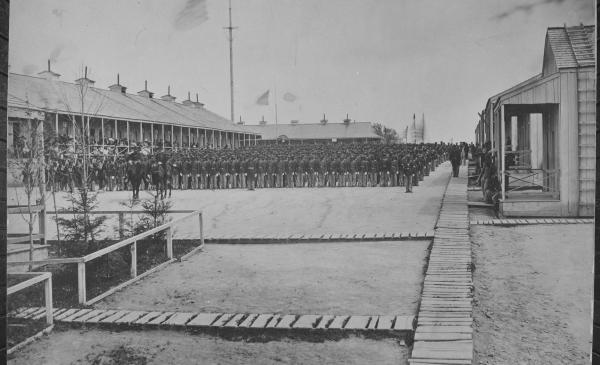 Springfield Ironworks, circa 1870. This photograph shows adults and children standing in front of the building in the center of the image, illustrating how family labor was used in nineteenth century industries. Pennsylvania was a leading producer of iron in the nineteenth century. In Blair County the first iron furnace went into production in 1805. Fifty years later, there were 32 iron- and steel working-establishments in the county. By 1870, Blair County’s iron industry was declining, eclipsed by the burgeoning iron production of Pittsburgh and its surroundings. Image courtesy of the Blair County Historical Society. For more information on Blair County’s early iron industry, see Charles B. Clark, A History of Blair County Pennsylvania, 1846-1896.

“Freedom to the Slave" 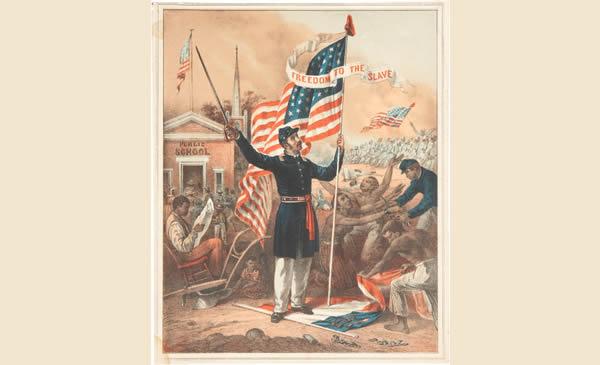 “Freedom to the Slave,” a lithograph that was produced during the Civil War, likely as a tool for recruiting African American volunteers into the Union army. An African American soldier at the center of the image holds the Union flag, which flies from a pole carrying the banner “Freedom to the Slave” and topped with a red liberty cap. The soldier stands upon the Confederate national flag, which is being ripped into shreds by a newly freed slave. The public school in the background and the plow in the foreground, both on the left side of the image, symbolize the promise of education and economic opportunity for freedpeople. This lithograph directly linked the prosecution of the war to the emancipation of slaves, portraying African Americans’ participation in the war as integral to the defeat of the Confederacy. 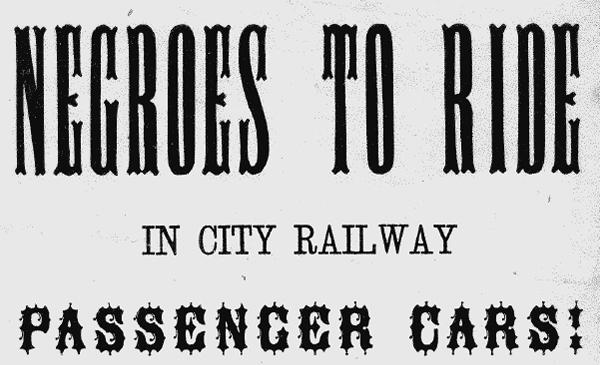 This is a portion of a broadside produced during Philadelphia’s 1868 mayoral election. The campaign of Daniel Fox, the Democratic challenger, seized on the movement to desegregate Philadelphia’s streetcars as a central issue in the campaign. The full broadside implicitly criticized incumbent Republican mayor Morton McMichael (who, ironically, was not running for reelection) for refusing to publicly state his position on desegregation, while praising Fox for writing “manly” public letters to the Philadelphia Inquirer and Ledger newspapers that emphatically stated his opposition to streetcar desegregation and “all social and political equality with the Negro Race.”